For the past several years, WordPress has been one of the more popular CMS’s across the world.

This has been driven by a variety of factors, with one of the most notable being that it’s quite simple and easy to use and offers quite a large number of features.

One of the more common reasons that people have chosen it is because of the variety of WordPress SEO tools that are available, which can be quite beneficial for the majority of website owners. However, there are a variety of other factors that potential website owners will have to consider when setting up a website.

One of the most notable of these is which WordPress hosting provider they should choose. There are quite a significant number of them to choose from, which could end up making the decision somewhat overwhelming.

Whether you are starting a WordPress blog or an Ecommerce store, here are the best hosting providers for WordPress:

Click on the host in the table below to read more information about each provider:

Alongside this is the fact that there are a variety of factors that you’ll need to look at when choosing one.

Some of the most notable of these include:

There can often be quite a significant number of factors to look at when choosing a hosting provider. Ensuring that you’re happy with the above when making the decision will often mean that you should have the right provider for your needs.

However, this can often lead to many people wondering which company they should choose when looking at and comparing different providers.

While there is quite a significant variety of them to choose between, there are a few that stand out much more than their competitors.

BlueHost has remained a popular choice as a hosting provider for many small business owners and bloggers using WordPress for quite a significant amount of time. There are quite a considerable number of reasons for this, with some of the more notable of these being that it offers a large amount of performance.

This can be seen in both the provider’s uptime and its speed, where it outperforms the majority of its competitors. Alongside this is the fact that BlueHost typically offers quite an attractive number of introductory offers, which then renew at $7.95 per month.

Want more traffic to your WordPress website? Take our free WordPress SEO Analysis and see how you can improve your traffic to get more sales online.

As a result of this, it can be seen as one of the more cost-effective choices for the majority of website owners. It should also be noted that this is one of the few hosting providers that has been recommended by the WordPress.org community, which has primarily because of the features that it provides.

BlueHost also offers quite an extensive WordPress knowledgebase, which is something that the majority of website owners may want to take advantage of. There’s also an easy installation feature and a free SSL certificate.

WPEngine is one of the fastest hosting providers you can get for a WordPress website. It does cost 3-4 times than most of its competitors but its 5-10 times faster (and better).

If you are looking for the Cadillac of WordPress hosting then WPengine is the perfect host for you. It has a ton of amazing features that make it one of the best providers out there.

It includes a one-click staging site so you can work on your site without causing downtime. Another great feature is that it comes with a free CDN so that you can host your files and increase your website speed.

When you buy WPEngine, you also get access to their premium WordPress themes that are built on the Genesis Framework so they are very fast.

Similar to BlueHost, HostGator has been quite a popular option for WordPress users for quite a large amount of time. As a result, it has grown to host over 10 million websites in the past few years. Much of this has been because it has a significant number of features to utilize.

Depending on which plan you choose with the hosting provider, you might also be able to transfer your domain for free, which few other providers offer. Alongside this is the fact that each of HostGator’s plans come with unlimited storage and bandwidth, as well as email accounts.

One of the only drawbacks here is that HostGator can be slightly more expensive than many of its competitors, although you should get a large amount of value with this price tag.

SiteGround is another hosting provider that has been recommended by the WordPress.org community, with this being because of the various features that it offers. While the company has fewer customers than many others, this shouldn’t be taken as a negative sign.

Though SiteGround is based in Bulgaria, it’s one of the few European hosting providers that doesn’t lag when offering its services to American customers. The primary reason behind this is that the company’s servers are worldwide, so it should provide a significant amount of uptime and high speed for each of its customers.

There are a few features that you’ll be able to take advantage of with the provider, with some of the more notable of these including a free CDN. Alongside this is free image optimization, which should help to improve your website’s loading speed. 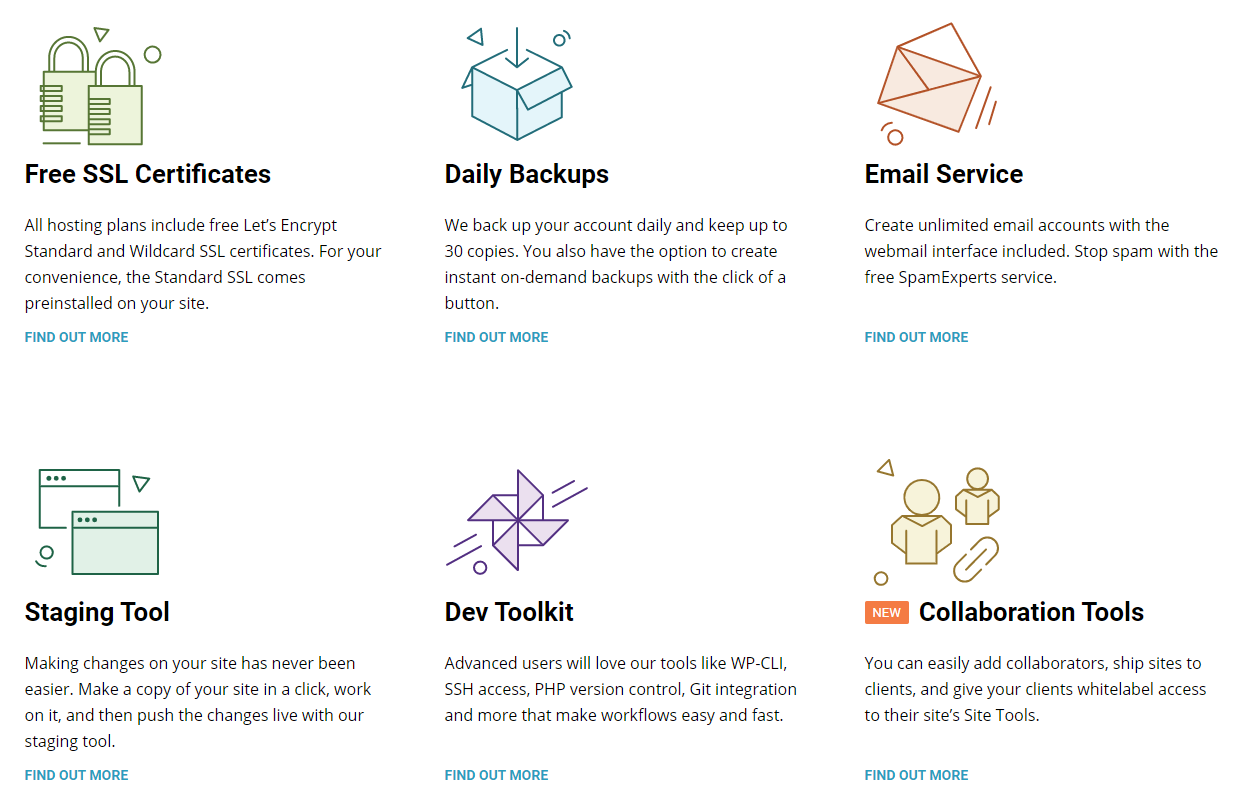 However, there are a few drawbacks with SiteGround, with many of these focusing on the price. While the hosting provider is already slightly more expensive than many of its competitors, its high registration cost can be a negative factor.

A2 Hosting is a low-cost WordPress hosting provider that offers quite a significant number of benefits, with many of these focusing on the speed of the websites that it hosts. Alongside this are a few other features included in each of its plans as standard.

Some of the more notable of these include free SSL encryption, unlimited storage and bandwidth, and free Cloudflare CDN. The company also allows customers to change their server location whenever needed, although this is limited to two USA-based servers, as well as ones in Singapore and Amsterdam.

The option to switch between these locations can be quite beneficial, however. Alongside each of the features that come as standard are up to 25 email addresses, which should be more than the majority of people should need.

However, there are a few notable negatives here, with one of the largest being that it has slightly lower uptime than many of its competitors. There’s also the fact that it can take a little bit longer to get in touch with their customer support time, especially if you’re using their live chat feature.

GreenGeeks offers one of the more scalable solutions for hosting WordPress websites, with the company also offering a variety of additional features.

Much of this is focused on keeping its hosted websites secure, with this including free SSL encryption, among a variety of others.

Some of the larger benefits that customers will be able to take advantage of are an unlimited amount of bandwidth and storage, as well as an unlimited number of email accounts. Though the price tag associated with GreenGeeks is slightly more expensive than some competitors, there are quite a large number of features that come with it.

As such, this can be one of the more cost-effective hosting solutions on offer. You should also be able to choose between a variety of server locations, including Canada, the Netherlands, and the United States. While this isn’t a major factor, it is something that many people may want to take advantage of.

Similar to BlueHost and SiteGround, Dreamhost is a hosting provider that comes well recommended by the WordPress.org community. There are a variety of reasons behind this, with the most notable being that it offers quite an extensive amount of reliability and security.

Alongside this is that there are quite a large number of features that come as standard with each of Dreamhost’s plans. Some of the more attractive of these include free SSL encryption, free SSD storage and an unlimited about of bandwidth.

Each of these can be quite beneficial for the majority of website owners.

However, this doesn’t mean that there aren’t any drawbacks to the company. Perhaps the most notable of these is that DreamHost can be somewhat more expensive than many other hosting providers, which could be offputting to many people.

Also of note is that it has slightly lower uptime than many of its competitors.

There are a variety of reasons why InMotion can be an attractive proposition for many website owners, with much of this being because it offers both free SSL and a complimentary CDN. You should also be able to take advantage of an unlimited number of email accounts, as well as the choice between over 200 free WordPress themes.

However, there are a few limitations with InMotion that many people may want to be aware of. Some of the most notable of these include a limited amount of bandwidth and disk space, which could be offputting for some website owners.

Alongside this is the fact that it can be quite time consuming to set up your account with InMotion, especially if you’re located outside of the United States, which could be a problem for a larger number of people. This may also extend to customer support.

While Site5 isn’t the cheapest option available, it can offer quite a large number of benefits, especially for web designers and developers. The majority of this is seen through a flexible control panel, which offers quite a large amount of customizability, as well as stability.

Alongside this is the fact that Site5 offers quite a large amount of uptime, with the hosting provider outperforming the majority of its competitors. You can also take advantage of free Cloudflare CDN and site transfers, which are factors that can be quite beneficial. 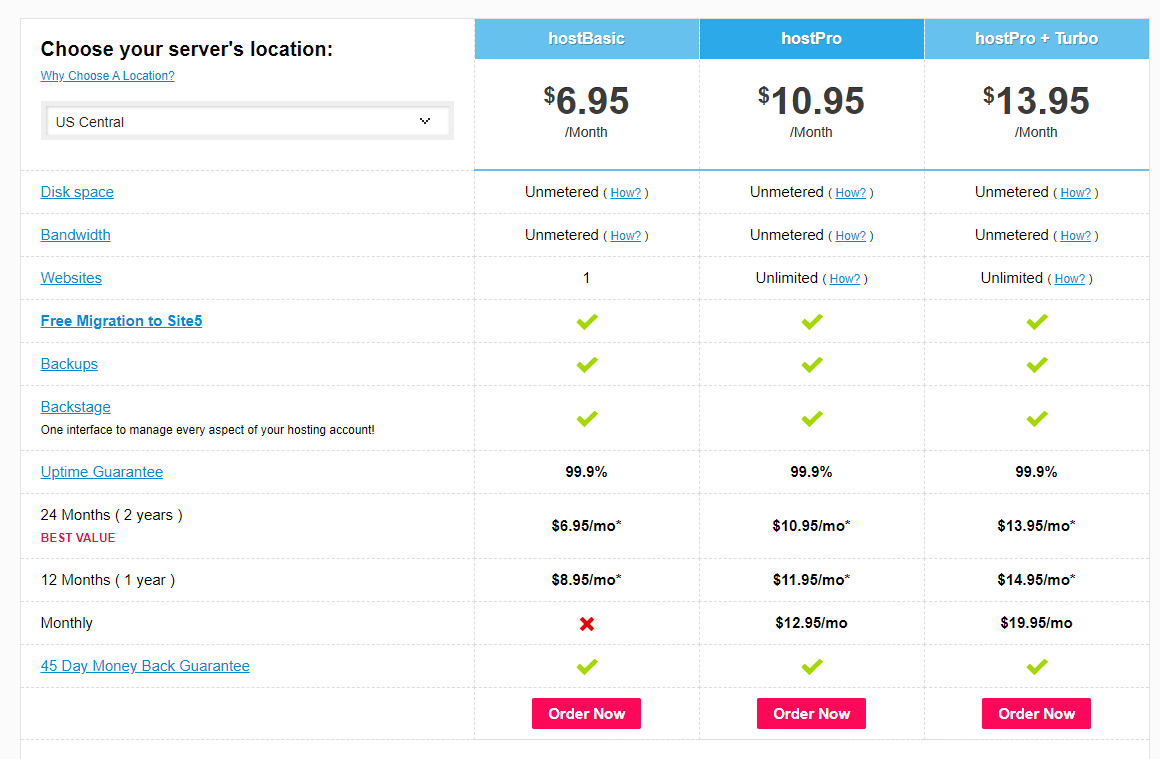 However, there are some notable drawbacks with Site5, with one of the more prominent being its billing cycle. The majority of people will be used to being billed at the end of their current term, although Site5 may do so up to two weeks before this, which can be quite unexpected.

There can be various benefits and advantages to choosing any of the above for your WordPress hosting needs. However, there are a few that stand out from the others, with BlueHost, SiteGround, and HostGator being some of the more recommended.

The primary reason behind this is that they should offer all of the features that you’ll want to take advantage of, with the prices involved being much lower than their competitors. When you’re choosing any hosting provider, however, it’s recommended that you weigh everything involved in the decision.

While the majority of owners will have certain features that they need, some can often vary from person to person. Alongside this is the fact that many people may put more weight on certain services than others, which could have quite a large impact on your decision.

With how expensive it can be to transfer a website from one host to another, it’s recommended that you choose the right service provider from the start. This will mean that you’ll have to spend a significant amount of time comparing each hosting company.

By doing so, you should be able to avoid a significant amount of time and hassle alongside the financial costs associated with switching. If you choose one of the above, you shouldn’t be disappointed with the decision.

You’ll naturally have a variety of requirements for your website which will have quite a large impact on your decision, such as WordPress SEO tools, among others. By focusing on these requirements and comparing them to what each hosting provider offers, you should be able to narrow the choice significantly.

Tyler Horvath is an SEO Expert with over 15 years of experience in search engine optimization, popular blog author and WordPress SEO expert.